On Jan 25, 1917, 300 sex workers in San Francisco marched to protest the imminent closure of their brothels. The #OldProProject is an annual event that builds towards this anniversary, and this episodes takes a deep dive on its history and significance.

The #OldProProject provides resources to sex worker artists and advocates to celebrate our shared history. #OldProProject is working with city coordinators connected to active decriminalization efforts in five cities. Those city coordinators, in collaboration with their community, proposed art projects to capture and celebrate their local old pro history. This year we are working with communities in New York, NY, New Orleans, LA, Portland, OR, Seattle, WA and San Francisco, CA.

This History is for Everyone

The Oldest Profession Podcast, in partnership with Sex Work Rights, SWOP Behind Bars, and the Sex Work Project at the Urban Justice Center is funding an art build in five cities across the country to celebrate the anniversary of the first sex worker led protest in the United States. The #OldProProject is a nationwide community collaboration that brings the lives of historical sex workers to life through a variety of art mediums, from music videos and murals, to posters and zines.

The #OldProProject provides resources to sex worker artists and advocates to celebrate our shared history. #OldProProject is working with City Coordinators connected to active decriminalization efforts in five cities. Those City Coordinators, in collaboration with their community, proposed art projects to capture and celebrate their local old pro history. This year we are working with communities in New York, NY, New Orleans, LA, Portland, OR, Seattle, WA and San Francisco, CA.

On January 25th, 1917, 300 sex workers in San Francisco led a protest to fight the imminent closure of their brothels, where they lived and worked. Their basic demands were ignored but their story continues to inspire living sex worker rights advocates.The #OldProProject seeks to celebrate this historic moment, which you can learn more about on The Oldest Profession Podcast episode, Why January 25th Matters.

“It’s important to remember that we’re part of a multi generational struggle, and that sex workers have been resisting their criminalization since the beginning,” explains Savannah Sly, National Coordinator of the #OldProProject.

Dr. Charlene Fletcher PhD, historian for the #OldProProject says, “This history is for everyone. These stories belong to all of us and they should be celebrated.”

All of the projects being undertaken in cities across the US can be viewed on the #OldProProject website. The national team, as well as local artists and advocates working with the project can be reached through our publicist, Irene Merrow.

San Francisco has a storied history of old pros. The city’s population, and its reputation for vice, boomed due to the 1849 California Gold Rush. Men and women flocked to the city’s Tenderloin District – then known as the Barbary Coast – to establish brothels, saloons, clubs, and gambling houses attracted sailors, shipyard workers, and old pros to cash in on the economic opportunities available in the district. The neighborhood encompassed nine blocks and as its popularity increased, so did the moral reformers’ desire to shut it down.

Moral reformers worked tirelessly during the Progressive Era to combat prostitution and in 1913 the state of California passed the red light abatement act designed to eliminate prostitution by forcing brothels to close in San Francisco city officials ordered mass evictions slated for February 1917 but two of the tenderloin district’s madams: Maude Spencer and Reggie Gamble lead an army of more than 200 sex workers into the Central Methodist Church to explain why so many of them turned to prostitution: living wages, to provide for their children, and economic independence.

The church’s pastor, Reverend Paul Smith, was an anti-vice crusader who launched a vile campaign against old pros hoping to drive them out of the community. Reggie Gamble marched straight into the church pulpit and demanded economic justice for sex workers, specifically noting the gender based wage gap and presented sex work as an avenue for women’s economic freedom. This moment became the first sex worker rights march in history. Sadly, 103 years later, women around the world are still fighting for equal wages, sexual freedom, and sex workers are still fighting for their labor to be acknowledged as labor.

In 1913, an old pro who went by the name Alice Smith published a serialized memoir in the San Francisco Bulletin. These memoirs, along with correspondence from other pros, and working-class women, are presented in this book.

Chateauvert places sex workers at the forefront of the social justice movement, despite being largely ignored by scholars. This book illuminates the voices of SWs who are pushing a global movement for sexual freedom from the 1970s to the present day.

MacLaren recounts the narrative of the 1917 March and includes additional information about Rev. Smith and his responses to the women after the event.

Authored by the director of the Tenderloin Museum, this book provides the cultural history of the Tenderloin district, with emphasis on the January 25, 1917 event and the influence of old pros on economic diversity in the 21st century. For another brief synopsis by Randy Shaw, visit this source.

A brief synopsis of the march and also the source for the San Francisco Bulletin images provided in the “Images” tab. 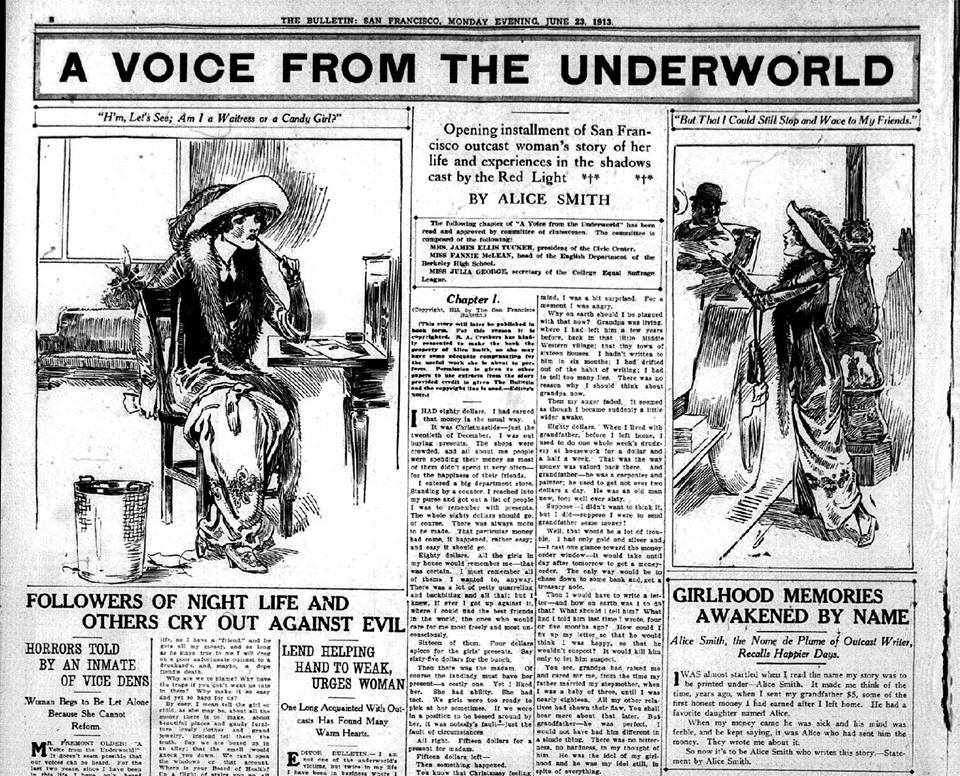 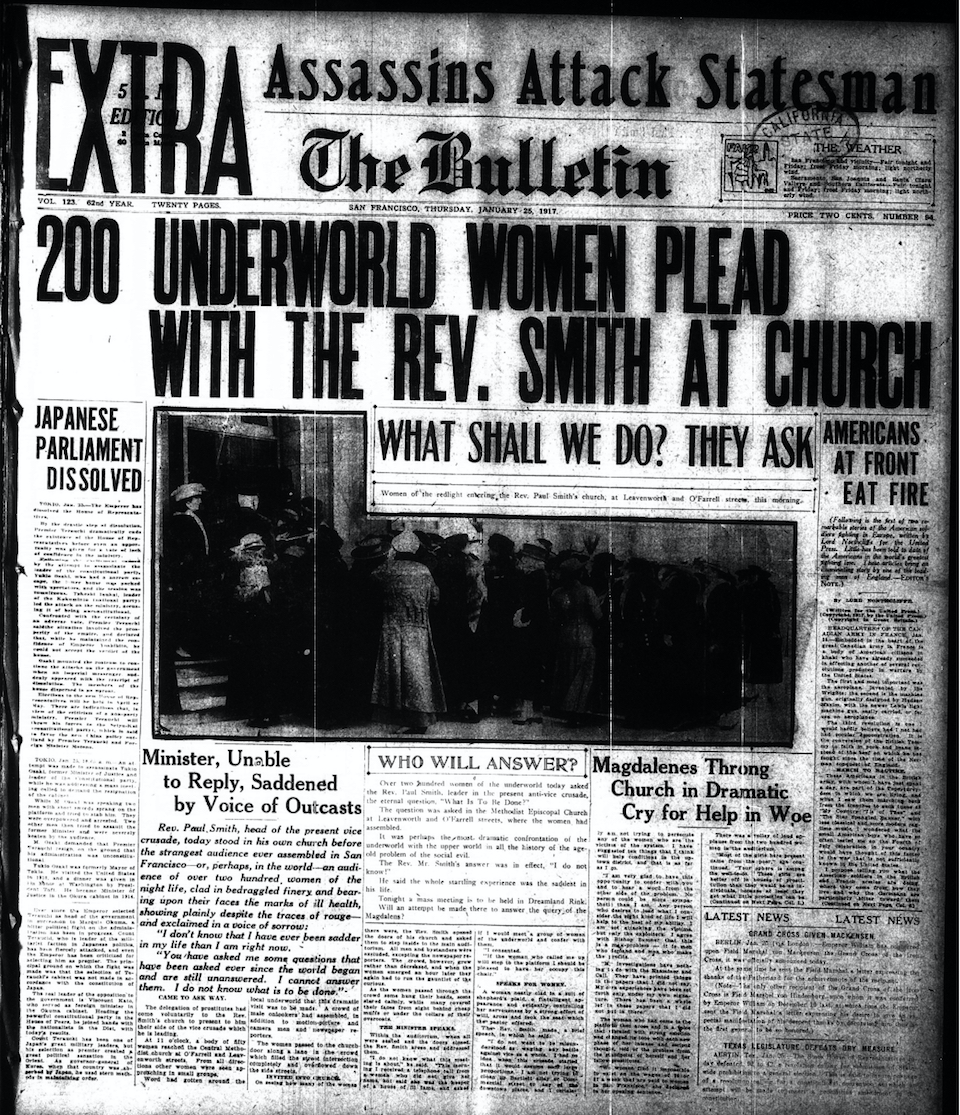 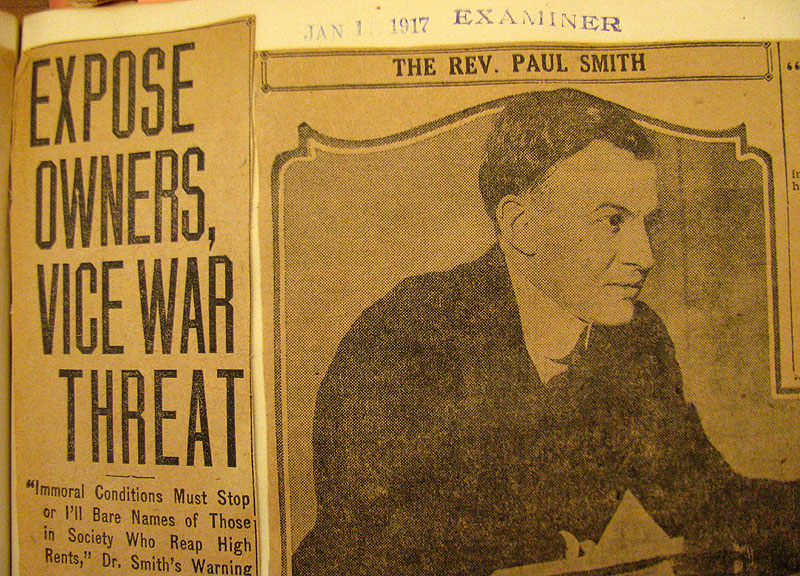 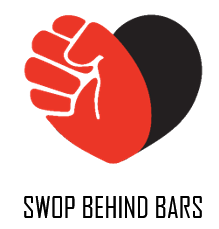